SANJAY RATH - Astrologer extraordinaire who has allowed me the privilege of being his student since 1999. His knowledge continues to inspire with profound insights into life's big questions.  www.srath.com
"When I started, I was amazed that the planets revolved around the Sun so meaninglessly (how could God have created something as stupid as this?) and had asked as to how can they be so jobless to just hang out over there and meaninglessly just revolve and rotate..it took some time to see that the motion was not meaningless and more time to learn the meaning...I am still learning." 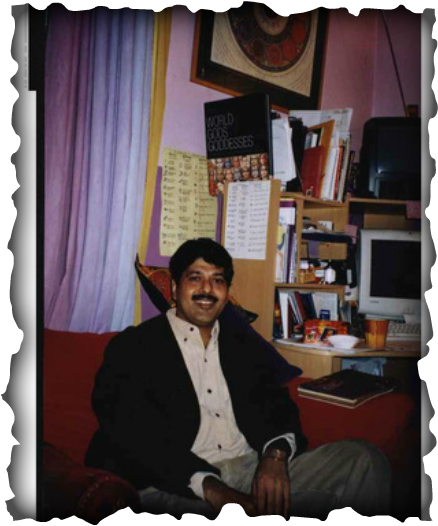 Sanjay in my Astrology classroom in Pearls of Wisdom, Quay Street, Galway 2002
Sanjay's  Foundation of Astrology
The zodiac at any point of time is divided into two halves by the line of the horizon. Since the earth rotates from the west to east, the planets and other stars seems to move in the opposite direction from any stationary point of observation on the earth. The sun rises in the east in the morning, ascends to mid-heaven (middle of the sky) by Mid-day and then starts descending till it sets in the western horizon. Lagna is the point in the heavens that is just about to ascend or rise in to the heavens signified by the visible half of the zodiac and is akin to sunrise. This is called the ascendant. Similarly the point in the western horizon which is just about to descend or go below the horizon is called the descendant. The zodiac is divided into two halves called the Drushya (Visible) or adrushya (Invisible) by the line of the horizon. The drushya rasis or zodiac signs (complete or portions)in the visible half are the heavens called the Loka whereas the adrushya rasis or zodiac signs (complete or portions)in the invisible portions or below the horizon are called the hell or Tala. There are two postulates based on (1) Material and physical existence and (2)Spiritual existence, to describe these heavens and hells.

The physical universe is classified into three parts called Bhu loka (Earth), Bhuvah loka (firmament or the solar system which contains the navagraha) and swarga loka (Sky containing the fixed stars which is the residence of the demi gods). The geocentric zodiac (Bhu loka as its center) limited to Bhuvah Loka is called the Vishnu chakra (Tropical zodiac, where the weather and other phenomenon of the atmosphere and beyond are experienced). The geocentric zodiac based on the fixed stars in the sky is called the narayana charka (sidereal zodiac). These terms find specific mention in the Vishnu Purana. The pious hindu recited the prayer "Om-Bhur-Bhuvah-Svah" every morning for the blessings of the material creation as prefix to the Gayatri Mantra.

Thus, there are seven heavens and seven hells. The heavens called the Loka are in seven parts:

i. Visible portion of the lagna that’s has ascended i.e., from the starts of the sign to the longitude of the ascendant called satya loka symbolized by the thousand petal lotus on which rests Prajapati (Form of Brahma), the progenitor. This is the seat of the creator and he is praised by all HIS creation. It shows fame as a consequence of the praise and health and vigor.

ii. Visible portion of the seventh house/ sign that is about to descend or go into the invisible half i.e., from the longitude of the descendent to the end of the end of the sign called Bhu Loka (the earth plane). It shows the death and re-birth as this is also the Mrityu Loka or ‘where death occurs’

iii. The Tenth house/ sign (with the mid-heaven as the throne of Indra in it) called svah or swarga loka.

iv. The remaining signs/ house in the visible portion (8th, 9th, 11th and 12th) are the Bhuva, Maha, Gnanah and Tapah loka.

Thus, the seven heavens are Bhu, Bhuvah, Svah, Maha, Gnana, Tapah and Satya loka and the deities of the planets Mars, Sun, Venus, Mercury, Moon, Saturn and Jupiter respectively, preside over these loka. The seven Hells are the seven signs in the invisible portion of the zodiac called the Atala, Bitala, Sutala, Talatala, Rasatala, Mahatala and Patala respectively.

There are seven narakas (Most Inferior hells for punishment) below these seven Tala and are all situated at the Nadir, i.e., the point exactly opposite mid heaven in the fourth house. The spiritual Hindu recites the mantra "Om Bhur - Om Bhuvah – Om Svah – Om Maha – Om Gyana – Om Tapah – Om Satyam" everyday as a prefix to the Gayatri mantra aspiring for the highest heavens.
Thus, in any chart, the 7th house is examined for death and rebirth. If death occurs during the period of the planet in the seventh house or its lord, then re-birth is sure to occur. The place of rebirth can be guessed from the planet/ sign in the 7th house. If Mars is in the 7th house then rebirth shall be in an Island like Sri Lanka. Others indications can be read from standard text. It is also for this very reason that Parasara recommends the Mrtyunjaya Mantra with the prayer for Moksha during such periods of Planets connected with the 7th house. By constantly repeating OM TAT SAT and living a truthful life, the worshipper attains satya loka and the highest heavens beyond from where there is no return to this Mrityu Loka.